In the world of cooking, nothing is ever absolute! We each bring to it our own personality, our own taste, and our own imagination.

In all recipes, especially the old traditional ones, you will never get two families to agree on the same version. Adding an ingredient, taking away one, you will often be told that their particular version is the absolute best. Not to mention the one & only; the “original” one.

When it comes to giant classics, like stuffed grape leaves, the issue becomes slightly more involved to say the least. We’re not only talking about the various variations of a dish between families, we’re now also involving countries!!! A whole region as a matter of fact: the entire Middle East region, stretching to include its close neighbours as well!!!

Which version should we make? the Egyptian? the Syrio-Lebanese? or maybe the Greek version? but which part of Greece? or should we make the Turkish version? … and that’s just to name a humble few.

Being that I come from Egypt, logic says that I should present the Egyptian version here. But in all honesty I much prefer the Syrio/Lebanese one!!!! Having said that, I know that I am now treading into even thinner water, because after so many years in the kitchen, I kind of made my own version of the dish!

I love food! I love eating it! and I especially love creating it!

Get your broth started before doing the other preparations. You will need it to simmer for one to one & a half hours at least, in order to get the all-important lamb flavour well on its way.

Drain it, and reserve the liquid. Keep the meat on the side.

Rinse the grape leaves well under running water, then separate by placing the individual leaves on the edge of a few trays (as in picture). It just makes it easier to grab when you’re stuffing.

If there are any broken leaves, or leaves that are too small to stuff, keep them aside, you will use them to line up your cooking pan.

Mix the ingredients of the stuffing together, and moisten with a cup or two from your broth

Now you can start the tedious part!

Place the leaf flat on your working surface

snip off the stem (if any) with scissors

place a bit of stuffing and roll

it is very difficult to describe, so please follow the pictures. And remember: be patient…

Line your pan with the broken unwanted leaves

Place ½ of the lemon slices on top of that

Throw in ½ of the garlic cloves

Now you can start placing your rolled grape leaves in the pan, close to one another, and in a neat pattern

place the other half of the lemon slices

throw in the other half of the garlic cloves

add the lamb broth, cover the pan, and simmer for a s long as needed. You will probably need to add more liquid as you go along.

The length of cooking very much depends on the quality of the grape leaves you started with. Some brand names are softer than others, and therefore cook faster. You will just have to experiment until you find the brand that suits you best. As a general rule, I would say the minimum cooking time is a couple of hours. You just have to keep tasting for done-ness.

When it is ready, remove the lamb pieces into a separate dish, and drain whatever remaining liquid in the pan. Make sure you leave the flat dish that you cooked it with, as is, on top.

Place your serving dish on top of the pan, hold it and the pan securely with your two hands, and turn it quickly

now the bottom of your pan is on top. Remove the broken leaves you lined up your pan with, remove the lemon slices and the garlic cloves.

Your can serve with a light yoghurt, cucumber, and mint flavored salad. 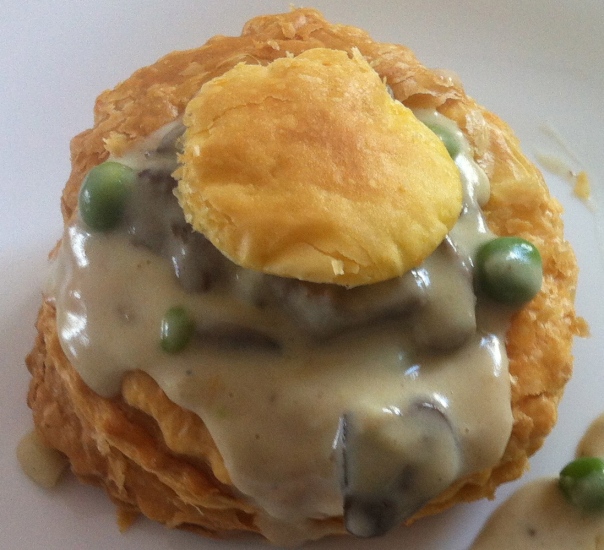 My mother-in-law was a great lady!

She was thoughtful. She was loving. She was giving.

She had a heart big enough to encompass the entire cosmos, and it did. But mostly, she poured her love back into her family: her children and grand children.

A real lady in every sense of the word, and I was fortunate enough to have shared the same house with her for ten years!

My mother-in-law also loved cooking. Going forward with this blog, you are bound to see a great many of her recipes.

She was “Nana” to her two adoring grand daughters, and since this is for you Maggie & Mona, that’s how we shall refer to her throughout.

Nana’s favourite holiday was Christmas, no wonder she’s been on my mind a lot these days! Almost every dish I think of, pushes her picture to the forefront of my mind. A huge happy smile!

I see you mother-in-law, so lets get cooking shall we?!

This very special appetizer, was one of Nana’s favorites. It always appeared on special occasions, and never failed to impress! The light puff pastry case, is very versatile and can be filled with anything really. Chicken, fish, shrimps, vegetables….

In this recipe I used chicken liver, but don’t panic please!! I know many people are not partial to liver, so feel free to substitute with whatever feels right to you.

Frozen puff pastry (the kind that is already cut into rounds. I used two packets of 10 rounds each, which make 10 vol-o-vent cases)

brush the 10 rounds with a beaten egg

bake in a 180 centigrade pre-heated oven with fan until done (sorry I never time it, I just keep an eye on it and remove when its done. Its safer this way.)

loosen the lids with a sharp serrated very pointy knife, handling the pastry really carefully & lightly. Remove any extra bits & pieces (if any) from the inside.

Cut your filling into small bite-size pieces, cook separately, and keep on the side

add the mushrooms and the frozen peas

add the cooked filling to the mixture

(you can cook your filling from the day before and just re-heat before serving. But never, EVER, prepare your pastry ahead of time! Not even a couple of hours before. Believe me I’ve tried, and it is best served fresh from the oven. Your guests can wait that extra bit if necessary …)

spoon your filling into the vol-o-vent cases, place the lid on top, et voila! ready for serving.

I’ve been spending way too much time trying to figure out the best presentation for my blog, that I’ve been kind of distracted from my kitchen time. At this point, I’m still very much struggling with the indexing of my recipes, but decided to stop obsessing about it, and head to my kitchen instead.

Today I will make one of my husband’s favourite starters:

We first tasted this dish a few years back in a local restaurant, but never thought of recreating it until fairly recently. As it turns out, it is extremely easy to prepare, quick, and always a success.

some parsley for garnish

slice eggplant into 1cm-thick rounds (¼ of an inch)

fry in vegetable oil on both sides until golden brown

place tomatoes & onions in pan, sprinkle with sea salt, add some olive oil. Sautee (not for too long) until thick-ish

place yoghurt in a bowl, add salt to taste, some olive oil, and mix well with a spoon until smooth.

That’s all the work, the rest is just assembling!