OK guys, no uhh and eehh please. Octopus is absolutely delicious! And its not that you’ve never seen it before, anyone who’s been to a Greek island has seen tons of octopus hanging out to dry in front of almost every restaurant and taverna by the sea. Chances are you’ve taken many pictures with it and sent back home to your friends & family to see. And if you are courageous and adventurous, chances are you’ve even tried it. At least once.

I’m not sure however that you’ve liked it, if its not cooked right it can be chewy and rubbery. But I can assure you that it doesn’t have to be. Just trust me on this, and try it if you’ve got the chance. You will not regret it!

These Lent days you’re surrounded by seafood from every possible direction; in supermarkets, in restaurants, in mezze places, even on television. You just cant escape it. And I’m not sure that I’d want to. It is all super healthy and so… yummy. Not to mention a refreshing change from the traditional beef, pork, lamb, or chicken.

Jiji, I hope your octopus salad was successful the other day??

My sister-in-law Kathleen, was a huge octopus fan. She used to eat big hunks of it as I was cleaning and chopping it. Its a wonder I was left with any to add to the chopped veggies! After a few times, I learned to use 2 octopus instead of one whenever she was around! I miss you girl! 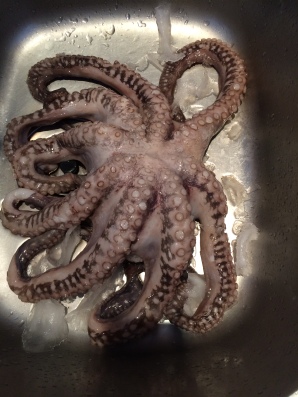 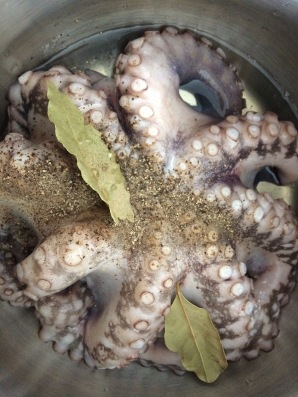 I always use frozen octopus, as I don’t know how to cook the fresh one; it always ends up rubbery. I’m sure there is a clever way to cook it in order to avoid that, I just don’t know it. 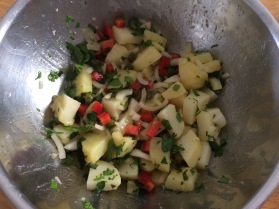 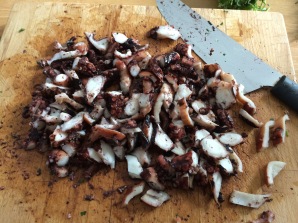 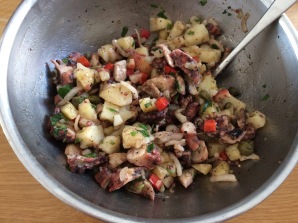 While the octopus is cooking chop your veggies and place in a large mixing bowl. Add some salt, lots of lemon, and some olive oil. Mix well & set aside.

When you’re satisfied that the octopus is tender: place a sharp knife through the thick part, if it goes in easily, then your octopus is cooked.

Place your cooked octopus on a chopping board, separate legs, take away as much as you can of the loose skin and tentacles with your hands, chop the rest in fairly decent size bites and add to your mixed veggies. Adjust seasoning: salt, oil, vinegar, maybe some Tabasco, mix well, put in a clean bowl and serve.

I do hope you like it. Be adventurous and try it: it is really delicious!